Abstract
The marriage contract is one of the necessary contracts and therefore, its annul-ment requires a special reason. In the Imamiyah jurisprudence, special and lim-ited instruments have been mentioned for the annulment of the marriage con-tract - because of its importance and impact on society. One of the cases that the husband can claim to annul the marriage is the wife's adultery - before or after marriage. In this regard, the present study - using library method and documen-tary study - is devoted to examining the feasibility of annulment of marriage due to adultery. The results and findings of this study show that, according to most of late jurists, if a man commits adultery before marriage, a man has no right to annul; however, some jurists believe that a man has the right of annulment in this respect, based on the principle of "no harm" and some narratives. From the author's point of view, it is incorrect to refer to the principle of "no harm" with regard to its unproven language. Of course, according to the valid statement of Abdul Rahman and Sahiheh Halabi, if the wife commits adultery before mar-riage and conceals it while concluding the (marriage) contract, the husband has the right to annul. The contradictory narratives of these two hadiths also relate to not being Makruh or permissible for annulment in order to use the right to annul, but based on Ibn Janid Baghdadi's view, if the wife commits adultery after mar-riage, the husband can terminate the marriage. Of course, from the author's point of view, the reasons presented to prove this theory are incorrect and the husband does not have the right to terminate the marriage due to consensus, publicity, and Istishab for necessity of the contract.
Keywords
Marriage, annulment of marriage, adultery, principle of no harm, Imamiyah ju-risprudence.

Abstract
One of the conditions stated for mahriyyah (dowry) is its determination and, of course, it faces challenges and ambiguities. The meaning of its determination, the inference of arguments (Nafy Gharar, Bay'e Jazaf) against the determination of exchanging items in the contract and the possibility of considering this condition in conclusion of marriage contract, the documentary and reasonable arguments in the necessity of complete determination of the dowry or the inference of brief determination of dowry,  the concept of brief determination, lack of conceptual clarity and referential knowing of moderate principle which in the narratives is considered as the solution of ambiguous dowries, are some of the challenges the determination of dowry has faced ambiguities. The current study seeks to men-tion the challenges in order to find the solutions based on the jurists' thought and viewpoint.
Keywords
Conclusion of marriage, dowry, challenges, known, determined, exchange, Gha-rar.

Abstract
Deceiving the Uninformed Person (Taqrir Jahil) is forbidden, either with the con-cealment of the truth or expressing something against it - if specific conditions exist and this is one of the famous jurisprudential principles that has been men-tioned and cited in various cases and even in the novel issues of jurisprudence. However, But all its aspects have not been elaborated in a centralized independ-ent work. This paper, for the first time, through descriptive-analytical research methodologies and library documents, examines and clarifies the contents, ar-gument of the jurisprudence (Qur'anic verses, narrations, reason, jurisprudential rules and the application of some arguments) and the scope of this principle so that the jurists' attention can be taken seriously in jurisprudential inference. Some jurisprudential principles, such as principle of Tasbib (wasting) as forbidden, the necessity of uninformed person in giving, the necessity of guidance of the unin-formed person, the denial of Gharar (uncertainty), the concealment of the truth and the relying on sin, can be evidence or proof for the validity of this jurispru-dential principle. This is a propositional rule that includes the general jurispruden-tial ruling and covers all or most of the jurisprudential topics and is applicable to minor cases. Therefore, in some cases, not taking exception will not disrupt its accuracy or even its generality since all the principles including jurisprudential and non- jurisprudential take exceptions in some cases.
Keywords
Taqrir, Jahil, Iqra', being uninformed about reality, Izlal, the reason for igno-rance, jurisprudential principle.

Abstract
In coping with the problem of poverty and its solutions, divine religions and hu-man schools have each provided ways for humankind. In the face of this phe-nomenon, Islam has also identified mechanisms. A glimpse at the jurisprudential rulings indicates that two sets of laws and regulations have been put in place to limit and eliminate poverty: One category is mandatory and obligatory (such as khums and zakat) and the second is the preferential and charitable (Mustahab) one and includes institutions such as donation, charity, waqf (endowment), and loan. The purpose of many principles of jurisprudence is the purpose of its man-datory rulings. Therefore, considering preferential rulings along with the manda-tory ones can lead to the simultaneous realization of Shari'ah's goal of making these rulings. Thus, it seems that using the enormous capacity of jurisprudential preferential rulings related to poverty and enforcing them, along with other man-datory and obligatory rulings, can lead to poverty elimination. Analyzing and examining this issue is the subject of this paper and accordingly - after examining the concept of poverty and the criteria for its diagnosis - the issue of donation and charity is dealt with and the final part of the paper is devoted to the study of waqf and loan.
Keywords
Jurisprudence, poverty, preferential rulings, donation, charity, endowment, loan. 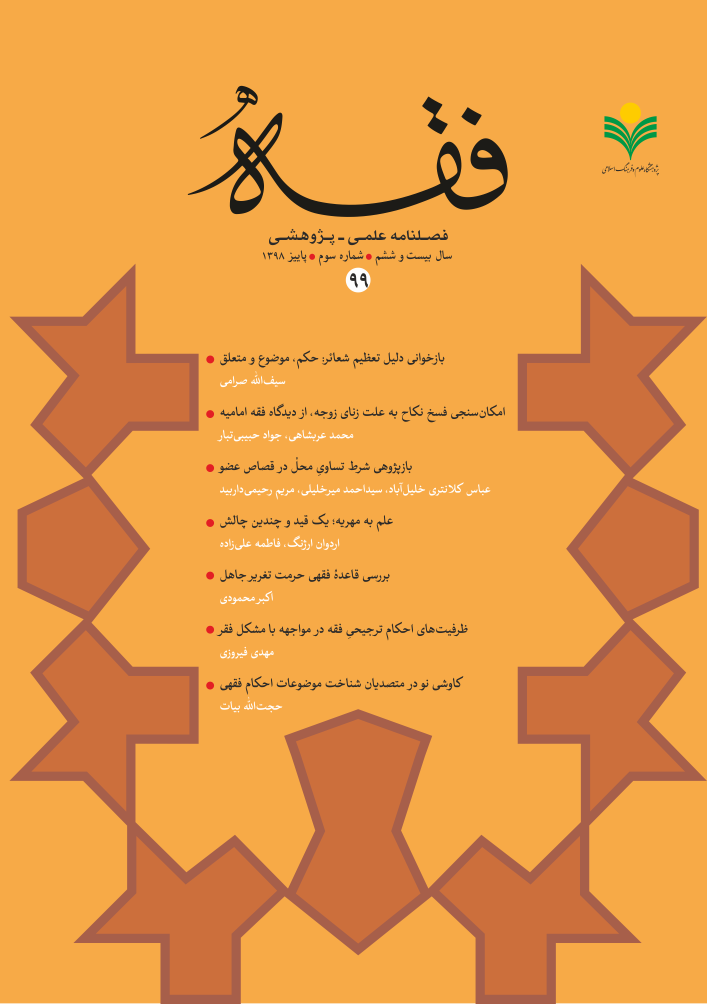