The Jurisprudential Examination of the Phenomenon "Champerty"

With a look at the Islamic Penal Code of Iran

The assignment of checks and promissory notes as a debt document has provided the context for jobs such as Champerty. A Champertor buys the nominal amount of not received check and promissory note from the creditor for a lesser amount and collects the amount stated in the check and promissory note by using legal or illegal solutions. The balance of buying the amount of the check and promissory note with nominal price that is demanded by the champertor provides the context for conflict in Fatwas on this issue. The phenomenon of "champerty" is sometimes associated with the champertor's committing inappropriate behavior. This leads to digressing from the topic in explaining this phenomenon and increases the importance of conducting studies on this topic. In addition to examine the brought-up fatwas, this study evaluates whether the research on this phenomenon would be possible considering the distinction of champertor's deal from his selective methods in line with vindicating the religion. Therefore, with a careful look at the authority of the debtor to pay back all the debt, based on most of the jurists' perspective, in this case, lack of the current "borrowed usury and transactional usury" will empower this requirement. Furthermore, because the crime of this phenomenon has not been determined, the behavior of champertor would be merely liable to prosecution when he intends to commit some actions such as threat.

Explaining the theory of "The Necessity of Timed Partnership"

With an emphasis on Some Fatwas of Contemporary Jurists

According to the most of the jurists' belief and civil law, partnership, even with determining time is a permissible contract and each of the sides can annul the contract any time they want one-sided. This belief can cause problems in practice. Thus, researchers have found solutions for this problem including the necessary condition in other necessary contract or condition of time in other necessary contract. In the meantime, some of the contemporary jurists have come up with better solutions in the form of a new theory. The current paper tries to explain this theory. According to this theory, there are two types of partnerships: The partnership in which the time is determined and it is considered a necessary contract, and the partnership that is absolute and with determining the time which is considered a permissible contract and can be annulled. This study has been conducted by collecting data and information from written resources, computer websites, and scientific software through a descriptive-analytical method. In this paper, the accuracy and efficiency of this theory is proven after explaining the viewpoints and examining the arguments in detail.

In Islamic jurisprudence, several issues about Expiation of deliberate murder have been taken into consideration. One of these issues that the past and late jurists agree or disagree on is invalidating the expiation in cases of murderer's retaliation or death. Each of these issues, which rely on some arguments, have been explained without considering the establishment or absence of establishment of Islamic government. The aim of this study is to find the better and effective issue in the time of establishment of religious government; the method is Ijtihadi and based on the analysis of the texts and viewpoints of the jurists. The study is organized based on this hypothesis that the viewpoints of the jurists against the invalidation of expiation with the murderer's death is superior to the most of the jurists' viewpoints and based on some arguments, the Islamic government is responsible for its attainment. One of the arguments is taking the financial expiation as being Hesbieh (which has a nature of punishment) and considering it as one of the financial resources of the Islamic government. The findings of the study suggest the necessity of attaining the expiation of the murderer's properties after his death and using it in religious specific advisable things by the heirs or Islamic government.

Standing up in front of people at the beginning of the relationship to respect them is one of the types of non-verbal communications, which is used in many cultures around the world. This non-verbal behavior is also considered a type of behavioral model in the field of lifestyle. This behavior is performed in such cases in Muslims culture: to respect the visitors by the host, to respect the teachers in the classroom, and to respect the religion scholars at the time of entering the mosque and taking advice. Through this behavior, some messages can be transferred including expressing happiness due to the visit, expressing modesty and courtesy.  The question of the current study is that "What is the jurisprudential decree, considering the message of this type of communication?" This paper, first, has examined the evidence and proof of the hadiths related to this topic through an analytical method. Then, it has criticized the common jurisprudential thoughts. Finally, the findings suggested that standing up in the aforementioned cases at the beginning of the relationship is not haram if it includes the person's humiliation or the other person (the guest) arrogance.

Ijtihad (deducing facts from Quran and Hadiths) and Ifta (delivering the legal opinions) have always been carried out in an individual form in the history of Shia jurisprudence. This study deals with "the authority and validity of the group Ijtihad and Ifta" and "getting the permission of Taqlid (following the instructions of a religious leader) from jurisprudential council". In terms of the topic, Ijtihad and Ifta are considered as specialized operations that are done in group. The examination of the evidence for authority of fatwa and the necessity of imitating the Mujtahid specially for example the conduct of intellectuals as the most important evidence suggest that the criterion for the authority exists either in the individual Ijtihad and fatwa or group Ijtihad and fatwa. Thus, the evidence for the necessity of imitating the Mujtahid proves imitating the individual as well as imitating the council. Examining the various criteria of authority for conduct of intellectuals in referring the ignorant to the religious scholar demonstrates that achieving the reality or the rational proof is considered as the most important criterion. This criterion is more possible to be accomplished in consultative Ijtihad and fatwa rather than in individual Ijtihad and fatwa. 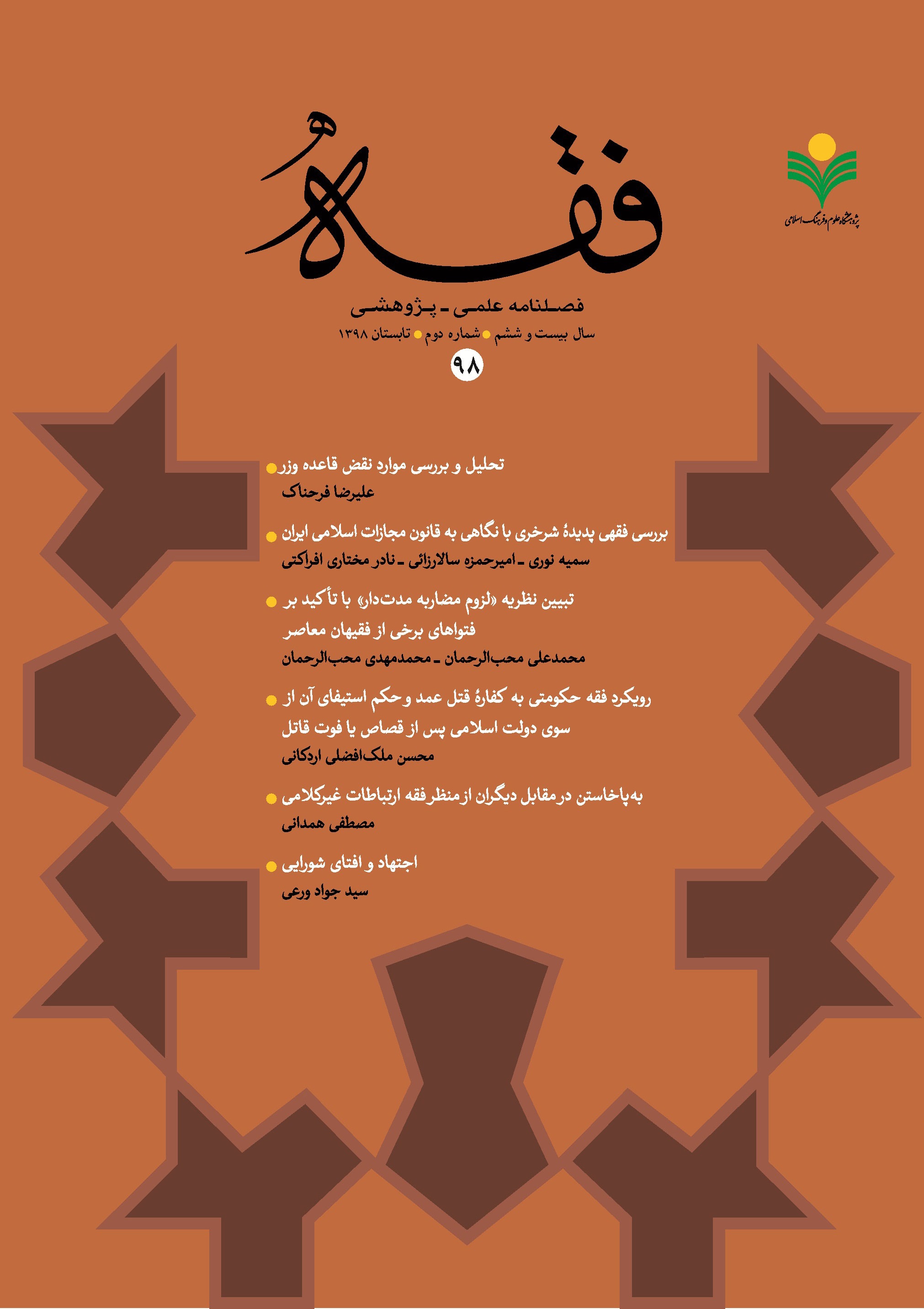