Faculty member of University of Religions and Denominations

Assistant Professor at the Research Center for Jurisprudence and Law, Islamic Sciences and Culture Academy

The purpose of this research is to prove the necessity of creating an ontology of Fiqh for the management of jurisprudential information and superiority of ontology of Fiqh in comparison to the thesaurus in semantic web space. The achievement of this research is a comprehensive structure of Fiqh that does not entail the restrictions of the traditional structures of Fiqh and the structure based on the juristic thesaurus. Based on this new structure, jurisprudential information can be best managed and organized in semantic web space. Based on the new structure, the user's needs can also be accomplished properly. To achieve this goal, two methods of thesaurus and ontology is compared. The study's conclusion is that there is no possibility of sharing knowledge between human and the machine through the thesaurus, but the ontology of Fiqh provides this possibility. That is, the ontology of Fiqh increases the level of standardization of jurisprudential data to the extent that data can be readily processed and understood by the machine. In this way, the data becomes smarter than before.

Testimony to Ownership Based Upon the Principle of Possession

Associate Professor and Faculty Member at the Faculty of Theology and Islamic Studies, Farabi Campus - University of Tehran

Associate Professor and Faculty Member at the Faculty of Theology and Islamic Studies, Farabi Campus - University of Tehran (Corresponding Author)

Ph.D. Candidate at the Faculty of Theology and Islamic Studies, Farabi Campus - University of Tehran

In terms of jurisprudence and law, there is no debate about the implication of the Principle of Possession (POP) regarding ownership. The problem is that possession in itself does not entail certainty while it is essential in giving testimony before a court to be certain about the subject of testimony. The research question is whether, as a testimony, one can testify to a person's possession on the basis of POP? Jurists' diverse opinions, shortcomings of legislation, and need for judicial institutions to clarify the attendant ruling in financial claims necessitate revising of the pertained doctrine and evidence of POP. In this research, along with recounting jurisprudential solutions, analyzing, and criticizing them, the research question is studied from the two aspects of general evidence (primary rulings) and specific evidence (Sunnah). The general and specific evidence indicates that permissibility of giving testimony by virtue of POP is restricted to the non-financial claim in which the defendant is the possessor and the plaintiff is aware of it.

Testimony to Ownership, Testimony as Evidence, the Principle of Possession, Apparent Possession, Substitution of Presumption by the Certainty.

The Role of the Infallible in Determining the Subjects of Rulings

Doctor of Professional Studies at Islamic Sciences and Culture Academy

Tasks of Infallibles, Identification of the Subject, Inference, Ijtihad, Philosophy of Fiqh.

The Qur’ānic verse (24: 2) indicates that the Ḥadd penalty for adultery should be executed publicly. However, there is a controversy over its generalization to other offenses. Given the doubling of public punishment, the principle of non-authority, and the lack of sufficient reason, it can be said that public enforcement of Ḥadd (PEoH) is devoted to adultery. Also, regarding adultery, the doctrine of the preferability of the presence of people during the execution of the penalty can be the basis of legislation. In addition, on the necessity of the presence of people, their presence has to be limited to the minimum. Promulgation and publicizing the execution of the penalty is not supported by any legal evidence. The New Iranian Islamic Penal Code, based on the necessity of narrow interpretation, is more consistent with the illegality of PEoH. The legislator, along with mentioning the publicity of the penalty enforcement in the previous provisions and neglecting it in the current Penal Code has intended to declare its opposition to the doctrine of PEoH.

Objections on the Establishment and Utilization of Breastfeeding Banks and the Correspondent Responses from Shī a and Sunnī Fiqh Perspective.

Given the importance of breast milk for medical reasons and the difficulty of its constant availability, the idea of the establishment and use of breast milk in developed countries, and recently in the Islamic Republic of Iran, has been put into effect. The question of this research is whether the establishment and use of a breastfeeding bank are permissible in Shariah? A large number of Sunni jurists have negative stance while there is no significant conducted research on this subject by Shiite scholars. In this article, one of the most important objections of Sunnī fiqh on this subject is expressed. Thereafter, their criticism is expressed from the perspective of Shī a and Sunnī schools of fiqh. This article concludes that establishing a breastfeeding bank and taking advantage of it is legitimate.

The Jurisprudential Review of the Third Testimony in Azan And Iqamah, Focusing on its Slogan Aspect

Assistant Professor and Faculty Member at University of Semnan 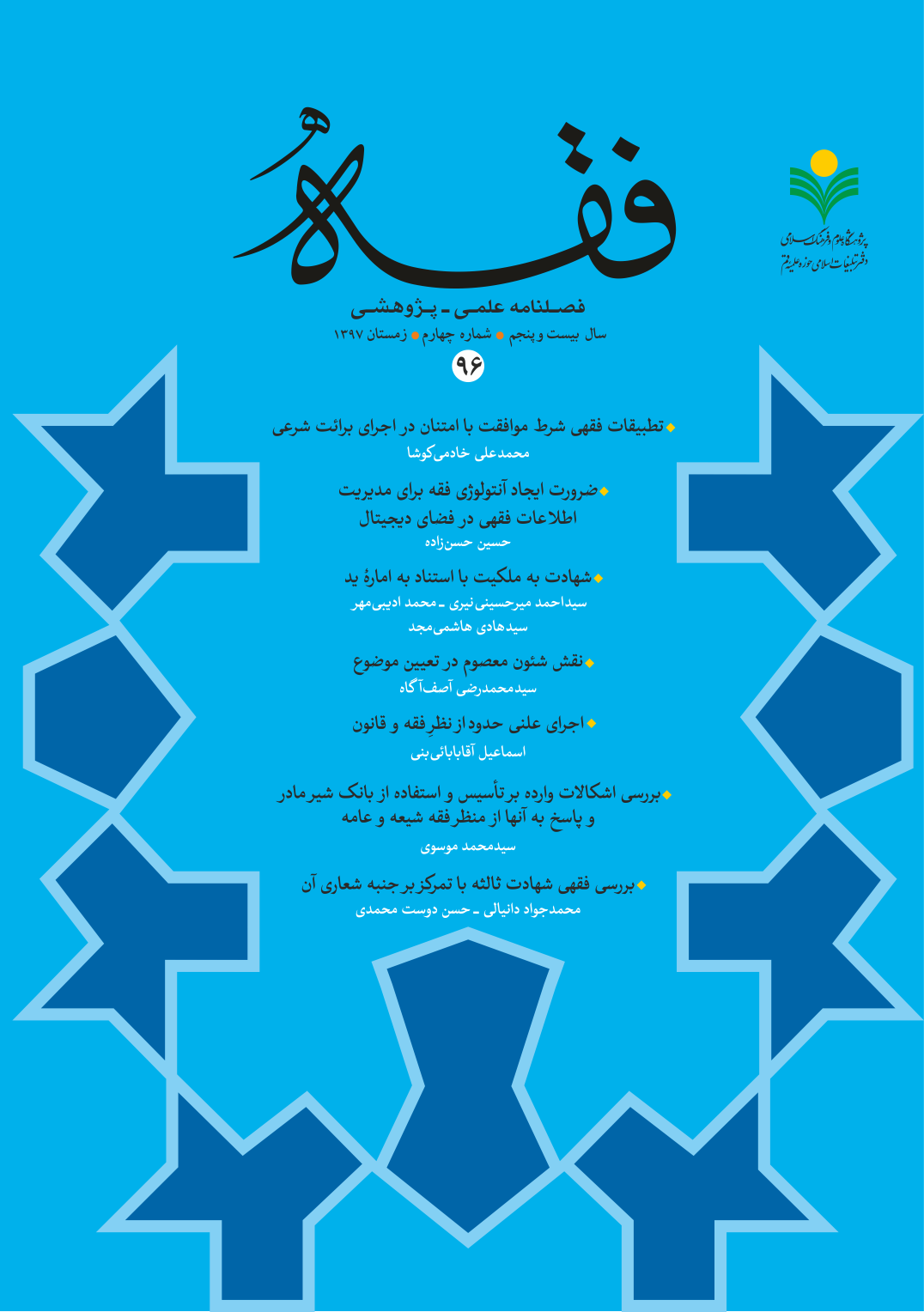