Imamiyyah and Sunni jurists have differentiated between the jurisprudential rule and the rule of Usul. In the following paper, there are up to fifteen distinctions and they are explained and evaluated by a descriptive-analytical method. The result of this evaluation is that the existence of two features in the jurisprudential rules distinguishes them from the rules of Usul. First, the rules of Usul are used either in inference or the Mujtahid resorts to them in practice after doing the research or being disappointed in the achievement of the reason and proof for religious ruling. Second, the rules of Usul for jurisprudential issues are used as a tool.

An Investigation of Developments in the Issue of Tamkin (Obedience)

With the addition of new corollaries to Shiite jurisprudence during the era of al-Tafri' jurisprudence (the jurisprudence that has the two following features: 1. the inference of issues and subjects in principles. 2. The systematic provision of jurisprudential texts based on Ijtihad and without depending on the text of the principle), new principles were added along with new corollaries to the structure of jurisprudence. Although the origin of some of them can be analyzed historically, but an important part of the consequences in this process has been unknown thus far. One of these cases is the phenomenon in which a variable in one period is added to the topics of an issue and while addressing the issue immediately affects all the branches. Then, over time, it becomes one of the principles to inference the other branches. This study tries to investigate these developments and criteria and illustrate its effects and consequences in Shiite jurisprudence through analyzing the evolution course of jurisprudential branches, from formation to evolution. The study is conducted based on the issue, "the definition of the criteria and limits of obedience in alimony". This issue has been involved in complexities and conflicts over different periods by passing a series of developments. By carrying out this study, the role of the historical course of the companions' approach to the formation of complexities and ambiguities in this branch will be clarified.

The present century that has known as communication period of the interaction between many global cultures, has faced with an evil theory called the civil war. In contrast, Islam has emphasized on peace, friendship, convergence, constructive interaction of cultures alongside inviting the other cultures to its knowledge. Given that at the beginning of communication, Islamic strategy is    "relation of starting the greetings", the question is: what is the jurisprudential precept of greetings to non - Muslim? The well known Imami jurisprudents have regarded the greeting of non - Muslims as reprehensible, and some of them believe that it is forbidden, and some other considered it permissible in the event of its positive influence on attracting them. This research has criticized the evidence of these three groups, and with inspiration of the Quranic verses and based on deductive methods, it has considered their evidence as null and void,  and according to the internal analysis of confident hadith attributed to the believers` prohibition and, and based on the implication of generality of the verse 8 / momtahena, and many Quranic generalities and absolutes, has concluded that the traditions governing on prohibition is special for harbi kafir (unbeliever is on the war against Muslims) and there is no reason for extension to the non - Muslims, and consequently, salutation of all the human beings except harbi infidels is praised.

Apostasy and its punishment is one of the controversial Islamic rulings. In Shiite jurisprudence, apostasy is divided into two types: Fitri and Milli (A person born to a Muslim parent who later rejects Islam is called a murtad fitri, and a person who converted to Islam and later rejects the religion is called a murtad milli). The most severe punishment for apostasy is related to the male Murtad Fitri which, in addition to the death penalty, also has other specific sentences. Famous Shiite juristss have mentioned two conditions in the definition of Murtad Fitri: First, at least one of the parents must be Muslim at the time of conception; second, the person must have chosen Islam at the time of puberty. There are a number of narrated and non-narrated reasons for the first condition. In this study, it can be clear careful investigation of these reasons that none of them are complete, but the narrations of the jurists indicate the need for parents to be Muslim. This idea is also based on the principle of averting and the rule of reservation.

Keywords: The Fitri apostasy, Murtad Fitri, the Islam of parents.

The legislator in Article 282 of the Islamic Penal Code, which was approved in 2003, has enacted that: "the penalty for Moharebeh (the war against Allah) is one of the four following punishments". a. Execution b. crucifixion c. the cutting of the right hand and the left foot d. exile from the land. Then, in Article 283 of the same law, according to one of the two jurisprudential perspectives (Takheer view; which is the freedom to choose one punishment over others) in this view has stated: "The choice in each of the four aforementioned cases in Article 282 is at the discretion of the judge". The judge, in accordance with Article 283, has the absolute power to choose any of the punishments provided in Article 282 for the Mohareb. the legislation of article 283 based on the delegation of absolute power for choosing the punishment to the judge, not only is not the most acceptable jurisprudential view in this regard, but also It has faced serious criticisms such as having conflict with philosophy of legislation for divine punishments and not observing the principle " the proportionality of crime and punishment". It also prevents the unification of the judicial precedent. In contrast to the " Takheer view ", there is another jurisprudential view, called "Tartib (choosing one of the punishments in order)", which, not only it has an index of "the principle of perceived justice in the order view", but it does not have the criticisms in the " Takheer view ". Finally, the current paper calls it necessary to observe the order in punishment, based on the descriptive-analytic method of evaluating reasons and, therefore, it criticizes Article 283 and proposes to amend it. 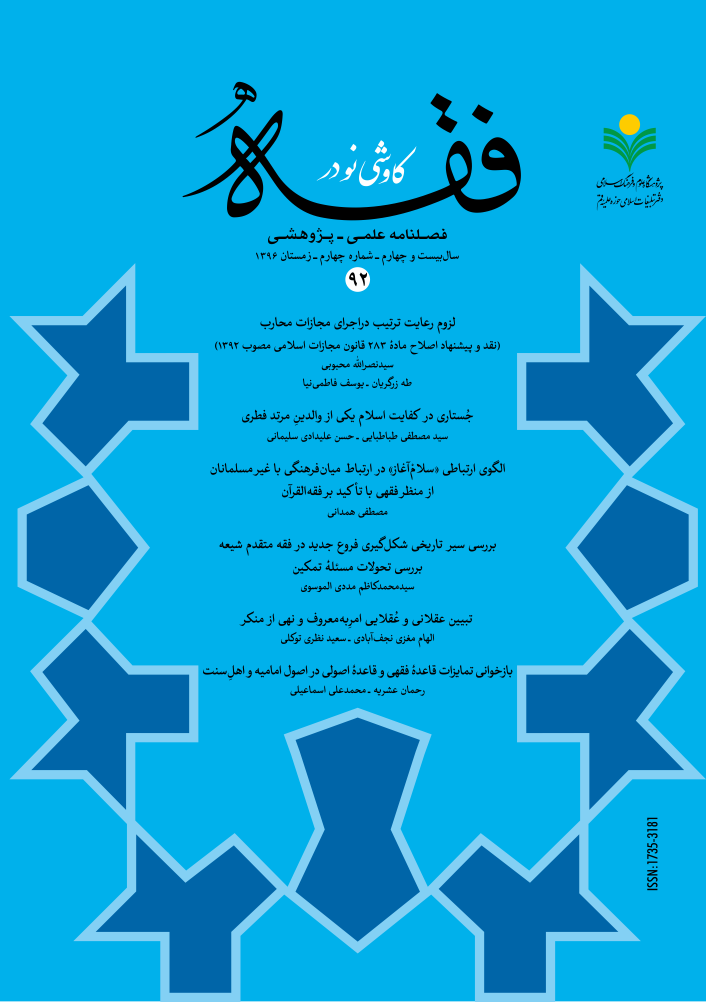