If returning a usurped and guaranteed property is impossible and difficult, the majority of the jurisprudents consider the guarantor as a responsible for paying the alternative of the property, and have called it as "substituted property". Its impact is to eliminate the disruption that an usurper has created it in the relationship between the owner and the property. This claim is proven and validated with help of many reasons. But every evidence alone cannot completely include all the examples of a difficulty. Branches of a substitute such as the ownership of a substituted property and its alternative, and their interests are connected and depended on the implication and the provability of the accepted reason. The contracting parties` intention and will which can arise from acceptance of common sense reason remains neglected. Without interference of the parties` intention and will, the permanent precepts as to the substitute property can hardly found. With the interference of the common sense, the intention and will of the two parties find their place. An explanatory reporting as to the standards and criteria of the ordinance, the assessment of the evidence, their formulation, the nature of substitute, especially the ownership which seems as a problem, and also the examination of the various ideas presented to solve it, is a glimpse of the walked way.

Imamate jurisprudents have a consensus as to existence of complete diya of two testicles. Nevertheless, how to distribute their diya between them is as a matter of difference. According to the generalities and some special traditions as to bisecting the diya of the couple organs of the body, the famous jurisprudents believe in the equality of their diya; but for some traditions that have described the child's development as the benefit of the left testicle, the other jurisprudents have considered diya of the left testicle more than the right one. An examination of the evidence suggests that the document and implication of the hadiths connected to the latter viewpoint are weak; also, the relationship of childbearing with the function of the left testicle has not been medically proven. However, in direction to adaptability to Imam Khomeini's fatwa, article 665 of Islamic Penal Code 2014 has complied with a non-famous opinion. Meanwhile researching jurisprudential documents of the problem, weakness of basis of law and the incomplte quoting from Imam` fatwa have been studied by this paper.

Keywords: diya of the couple organs of the body, diya of testicle, felony against physical integrity, imamate jurisprudence, and Islamic penal code.

Jurisprudential review of reciprocity through the forbidden act

The nature of "reciprocity" rule is based on a similarity to counteracting aggressor, but this is faced by obstacles placing restrictions on a rightful person. One of the barriers is reciprocity from the prohibited act. The prohibitions which beyond their reciprocity sphere, by themselves and as the first title are forbidden acts (such as false accusation of sexual intercourse and sodomy), and as well as those which, as the secondary titles, are the prohibited actions (like permissible insult that is considered as impermissible because of humiliation of religion), shall govern this rule in the face of taking counteraction. These prohibitions don not give to the victims to commit the same prohibited acts in order to receive their rights. Nevertheless, the prohibitions which became lawful for the secondary titles, in the state of taking counteraction, are permitted such as murdering a respected person during a war because of necessity. Of course, in the meanwhile, some prohibitions such as fornication, insulting the relatives of the opponent and the breaking the bone are subjectively out of the counteraction, for in the first and second prohibitions, reciprocal action does not occur, and in the third one, protecting the equivalence is not possible. Where reciprocity is forbidden in cases, there are some alternative ways for receiving the right such as reciprocal lawful act, and applying had (determined penalty), ta`zir (discretionary punishment), diya (blood money) and arsh (indemnity for defect).

Jurisprudential rules governing over the right of development

The rapid developments of the contemporary human rights discourse in the recent decades have considerably led to its conceptual and normative expansion. This issue has so far recognized three generations of human rights. Considering development as a human right and, consequently, the appearance of the "right to development", as one of the examples of the third generation of human rights and under the title of the law of solidarity are analyzable in this regard. According to the right of development, all the people deserve participating and profiting from economical, social, political and cultural development in the form that all the human rights and fundamental freedoms can be compensated. Due to the emergence of this right, the jurisprudential and legal exploring and explaining it can make clear its various and invisible angles, in the meanwhile has the great importance. This article is obligator for explaining the jurisprudential rules governing over the right to development. It seems that the rules such as no loss in Islam (la zara), destruction, justice and negation of mustache are among the rules that can explain the jurisprudential aspects of this right.

Jurisprudential research on learning the required precepts by discerning minors

Before the full age, learning required jurisprudential orders is obligatory. Meanwhile, given the exact record of the birthday hour in the modern period, an important question arises: Is it obligatory on the discerning minors who reach the full age in some minutes before the dusk and have no any opportunity to learn precepts of purity and prayer, to become familiar with these orders before the full age? If so, how can this contradiction between its necessity and the tradition of " rofe`a al-qalam" and also the consensus of lack of obligatory order as to minor, be resolved? According to Mohaqqeq Na`eini, this learning is obligatory on a discerning minor. However, many of his disciples and contemporaries have denied this necessity. This study is written in order to response to this question. While this paper is rooting this conflict as a reaction to Sahib Fosul`s ideas that have not had any precedent, it concludes that a discerning child has no religious duty to learn these precepts, and the hadith of " rofe`a al-qalam" has priority over the rational evidence of necessity for its gratefulness nature.

Suitability context between a precept and its subject, and its effectiveness on inferring the precepts

`Usuliyun (scholars of principles of jurisprudence)`s interpretations regarding the nature of the suitability context (qarineye monasebat) are different. They ultimately consider it as a customary context. However, a general common sense is not criterion.; but occasionally, the nature of a context depends on the common sense of the pious people (motesharre`a). `Usuliyiyun have applied suitability of context in order to prove an implication for any description(wasf), and for discussion of the derivation (moshtaq), as well as for eliminating ambiguity (ijmal) from the evidence and determining the collective duty (wajib kifayi). As for the proof of the multiplicity of desires, the proof of maintaining status que (istiṣḥab), the preference of one to another in the form of conflict (tazahum), eliminating a type ambiguity from the hadiths of rofe`a al-qalam and la zarar and some of inferred legal rules, the scholars have occasionally used that context. In all of these cases, authenticity of a context is based on refining the customary appearance. Many examples can be found that resolving religious problems ultimately depends on a kind of making customary appearance of legal texts. Because of breaking down absoluteness of an evidence and eliminating from it, being a context as a context of suitability has a basic role in the mentioned examples. 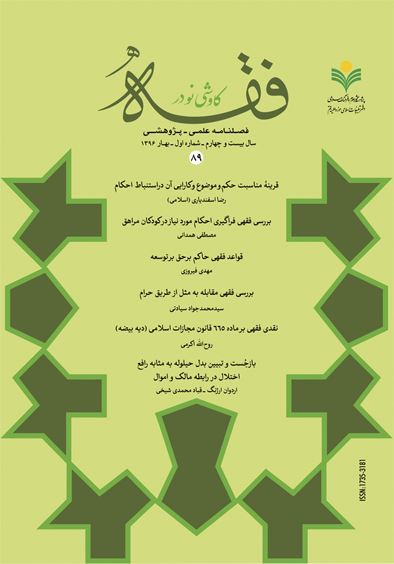