Development of all the sciences including elme usul (principles of Islamic jurisprudence) which is the most important means of an inference, in addition to innovation, is required to a continuing reform, and innovation and criticism is also available with an act according to a methodological foundations of any sciences. Following two last centuries, One of the problems of this science is that its research method is mixed with the philosophical method while the latter is a real science but osul is a contractual one. Imam Khomeini is one of the jurists that has tried his best to criticize strongly this incorrect mixed method. This study has searched all of his Osuli works (consisting of 14 books and two sets of his students` reports) and collected his criticism in this respect and specified with a statistic analysis. His most criticisms are concerned in the late Akhond Khorasani. In this study, the theoretical basis of mentioned methodological model is verified and his some difficulties are answered in this matter.

Key words: science of principle of jurisprudence, fact, assumption, philosophical method, rational- discursive method, and method of the common sense and the sane.

Development of taqiyyah theory in the Islamic jurisprudence since the period of Shaikh Tusi through Moqaddas Ardabili: divertion from cognitive method to thematic one

One of the prevalent methods of the Shiite jurists toward contradictory traditions has been that they were  attributing one of them to taqiyya (precautionary dissimulation).  However, the criteria for this attribution have been seriously changed throughout the various periods which one of  the most important of them has been the age of Shaikh Tousi in the fifth century; for the first time,  his method was  widespread and  he attributed a numerous narrations to taqiyya. But Shaikh`s methodological doctrine was changed in the later centuries of Islamic jurisprudence and every groups of the imamite jurists carried out its own approach as the nature of what had been presented by shaikh, finally  became different while Sheikh` methodology was a mere cognitive but it was diverted onto a irresponsible means. Similarly, because of the interaction between this issue and other juristic and usuli (principles of jurisprudence) problems, these transformations have made the effective roles in some developments of Shiite jurisprudence.

Researching these secrete corners makes clear the cause of some changes. This study will examine this transformation and its effective causes and also its influence on other areas.

According to the different propositions of Imamite jurisprudence,  entrance into the privacy has been forbidden. A person's privacy is an area that is exclusively known, entered into, controlled and decided by himself. The domain of this prohibition is not so clear for no extensive study has been made in this regard. Thus an inquiry is necessary in order to know a suitable answer to the jurisdiction of intelligence services to access individuals' privacies. Protecting the interests and security of  Islamic system is a secondary legal order (enwane Sanawi) that legitimates the entrance of intelligence s into the privacy of individuals, though this violation should be made with a brief information and in a necessary limit without disclosing their secrets.

This study has been made with the aim of recognizing the limits of  evidences and verifying the powers of intelligence cervices for entering into individuals' privacies. This goal was reached through describing and analyzing the juristic statements, and its data collection became possible through the library.

The independence of endowment  and the prohibited interference of whom is not the administrator and the designated controller of endowment affairs, are the acceptable principles in the Islamic jurisprudence. In order to prevent from misappropriating the endowments, an Islamic state is required to intervene into the administration and control of them according to the foundations of hesba (non-litigious affairs) and the guardianship of a competent jurist. Accepting both the necessity of the Islamic state`s intervention in the endowment affairs and protecting their independence has created lots of questions that this article is seeking to reply to them.

The author has tried to answer to the mentioned questions by separating and verifying the different aspects of the interferences such as administration, and discretionary and informative control based on two suppositions: a definite fault or failure, or doubtful ones to the administrators of the pious endowments.

Introducing the Islamic system model, intelligence services of Islamic Republic of Iran have always been faced with this question that within the framework of Shari'ah standards, what are the conditions and limits of entering into the privacy of the persons? Making use of descriptive-analytical method, the author has studied the subject according to the rational - discursive and narrative revealed foundations and in the framework of the principles and rules of jurisprudence.

Dividing consent into subjective and objective, It should  be noted that the governmental interventions do not require to a subjective consent, and this right is remained for the intelligence agencies to inspect the suspects, but regarding the individual interventions, a subjective consent is necessary and in the case of one`s opposition, a violence of his or her privacy is not allowed. Examining the principles of freedom of action (asle adame velayah), precaution, permissiveness and permissibility, all the interferences of natural and legal persons are not allowed as the principle demands it ,and  the citizens and rulers are equal in this regard. Accordingly, no one is permitted to violate the privacy of each other, and all the violations need the evidence. Similarly, in the form of the domain of Islamic government`s duties and form of evidences (of the public interest) there are no rational and logical criteria for entering to the privacy of others and to abolish this right.

The trial on the criminal and civil limits and also the arbitrations regarding the legal disputes are essentially the judicial and inherent responsibilities of the Muslim governor or government. One of the questions in the judicial debates is that whether a rightful can receive his or her right without bringing an action in the court while the debtor does not know his complaint. The debate set forth as "taqas" (retaliatory act) in Fiqh (Islamic jurisprudence) is for replying to the mentioned question. According to the Quranic and narrative evidences, the principle of permissibility of taqas is an accepted precept, but it has some different forms, and a common and general rule may not be issued in this regard, and the Muslim jurists disagree on some problems of it.

Considering a taqas rule, there are some questions to which paid attention by the Muslim jurists and followed by a number of details and restrictions but they are beyond our discussion. However, a crucial question is also that whether a right can be absolutely received from the property of government or the public goods or even  without initiating the proceedings as it might be understood according to the generality of the Islamic evidences and fatawa    ) opinions of the competent jurists( and absence of any restrictions on them. What should we do where  the authority of the Muslim government and state is disordered and damaged by the mentioned action? 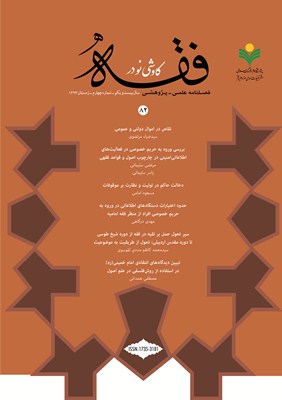