With planning relatively explicitly a  essential lawfulness of ghana in the period of growing Shiite Sufism, Feyz Kashani and Mohaqeq Sabzevari have been accused of being effected by Sunni Sufis and particularly Abu Hamed Ghazzali as a vanguard  Sunni Sufism. According to the opponents` approach, permitting ghana by Feyz and Mohaqqeq was a cleverly strategy until they could make Sufi  vajd and sama appear  documentary. But when theories of Feyz Kashani , Mohaqqeq Sabzevari and Ghazzali are compared with each other, we understand that Ghazzali`s definite purpose of  his permit was only acceptance of Sufistic rituals including vajd and sama`, and in contrast to Shiite foqaha, he was not so much faced with an obstacle such as conflicts of traditions in the Sunni resources. Therefore, Ghazzali has basically adopted a first rate and subject oriented approach to planning this problem, and for this reason, vastly tried to find the positive strategies for proving the permission of ghana. On the opposite side, are Feyz and Mohaqqeq who have used some elements of Ghazzzali`s theory in order to resolve many conflicts between  the Shia traditions and remove the specified ones, and for the reason of the same second rate and problem oriented approach, refused to justify the requisites of accepting essential lawfulness of ghana which is justly confirming  the Sufi sama`.

Analyzing concept of breaking into safe custody in electronic theft

One of the issues that is required to study accurately for adapting to the jurisprudential precepts, is an Had penalty of the electronic thefts; they can be applied where there are all the requisite requirements of implementing of cut off the hand. One of these conditions is to break into safe custody in a electronic theft. With studying the concept of hacking and its manner on the websites and computer systems, it is observed that - with attention to jurisprudential and legal definition of custody and that Islamic law has left distinguishing a suitable custody of any property to  the custom and reasonable precedence of any society - hacking can be a case of breaking in cyberspace which is happen by breaking codes of websites and computer systems, and its evidence is the custom`s judgment and opinion, and the existing precedence of internet users and IT and communication  specialists.

Considerable viewpoints on backbiting the opponent

One of the considerable questions in the realm of jurisprudence of difference is that whether backbiting the opponents and rejecters is permitted, or prohibited and inadmissible as it is the case about the Shiite which  the Imami Jurists called them as the believers. There are two theories among the jurisprudents in this regard. Some of them in the past as well as in our time consider backbiting the opponents as permissible and in the contrast to it, part of them such as Moqaaddas Ardebili and lots of the contemporaneous Foqaha regard it as forbidden and indecent. The correct viewpoint which is considering in this paper is the latter one, therefore, in order to strengthen it and remove its obstacles, theory of  permissibility is stated and criticized, and then Ardebili`s approach and the other followers of it is set forth and confirmed by some evidence.

Under certain conditions, injuring a person`s physical and spiritual entirety can cause some civil and criminal consequences. Nowadays, some new examples of these such damages which did not exist in the past, have been revealed by the scientific developments. Contaminating blood is one of them that is transferring many of the most dangerous and the most fatal diseases to others now. Considering that some forms of this subject have criminal and criminological aspects, the criminal feature of  this subject is to be taken an account in this paper. The main question of this paper is: what are the obligatory and conventional orders, and the limits of a transferor`s criminal liability?

According to the achievements of the research, transfusing contaminated blood into oneself or another without any reasonable motive, and deliberately, is forbidden. Where, in accordance with the criminal responsibility, this transfer is resulted to injury or death of another, its perpetrator is entitled to punishment which has different conditions. But its involuntary transfer is only resulted into compensation (diyah, arsh and cure costs).  This paper is written with a descriptive-analytical method and a current jurisprudential one.

Hence, I am studying this question in this paper: what is the purpose of legislating a guarantee contract? what is the nature of the mentioned guarantee? It can be summarized that the aim of legislating a guarantee is doing a favor the debtor and transferring an obligation is according to being absolute of a guarantee contract not in its nature. For this reason, there may be a joint liability where a contract is concluded with a condition. Paying attention to the literal concept of guarantee which is synonymous with placing and including something as a part of group, shows  the bail aspect of guarantee as suretyship and security. However, there is no doubt that suretyship and security are the third party`s doing favor.

Keywords: surety, guarantee, transferring and adding an obligation and contract of guarantee.

The impact of terminology on strengthening the jurisprudence (Fiqh)

Terminology has a considerable impact on systemizing scientific terms. Its role in a suitable perception of structural form of sciences is indisputable. This effect on strengthening Imami jurisprudence is stated by this paper, and accordingly,  it is seeking a reply to concern about classifying internal - scientific of "jurisprudence". Studying the subject is organized in the four axes; in the first axis, the paper  speaks about importance of terminology, in the second one, it examines some subjects that are mechanisms of  knowing the terms of sciences; the third one discuses of  terminology`s effect on limits and extension of Fiqh, and the fourth one is specified for researching and exploring Fiqh in the terminological form, and also for its distinguished utilities.

Keywords: knowledge of Fiqh, classifying the sciences and Fiqh, dictionary and terminology. 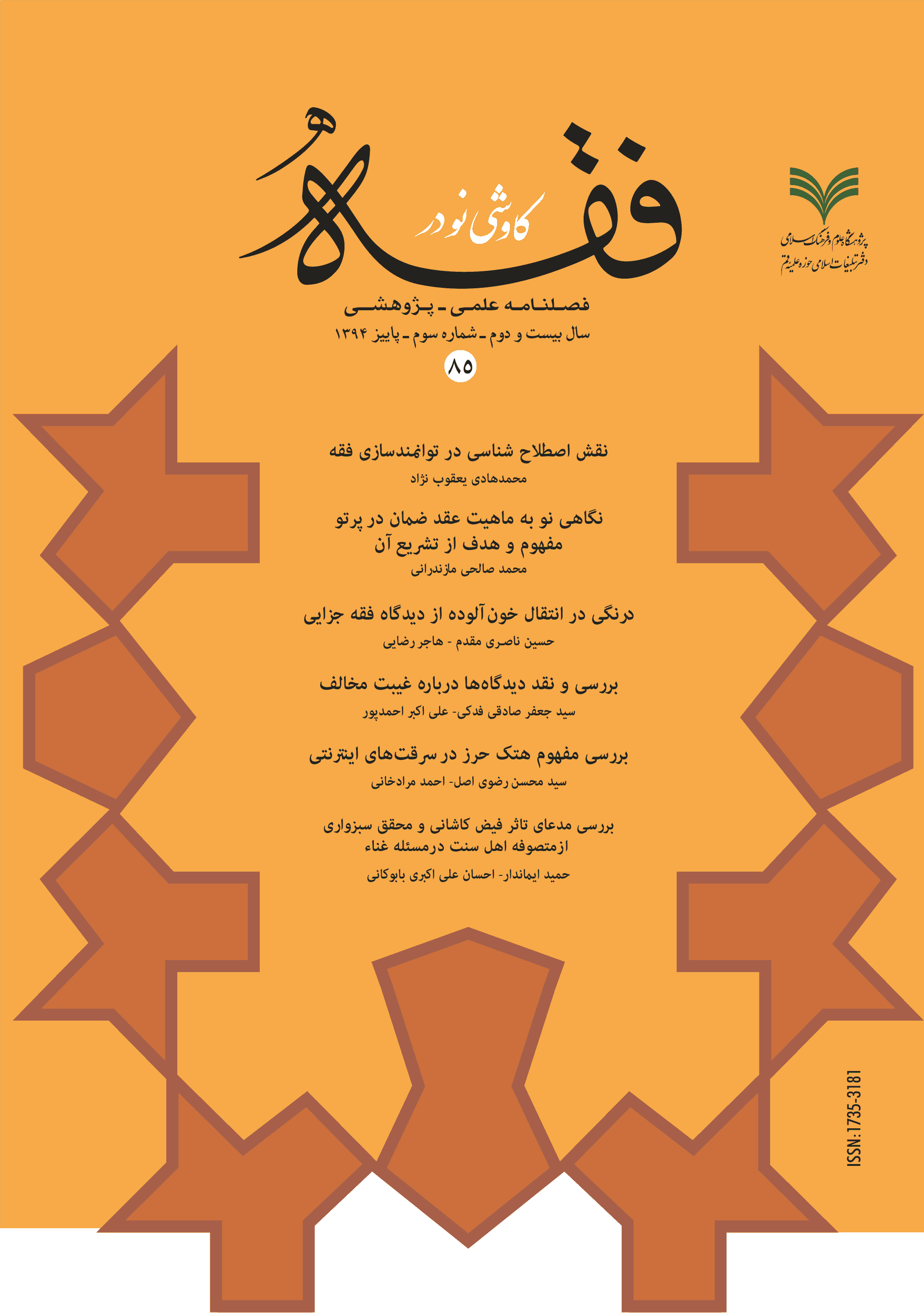